Monkey studies to fill part of live broadcast from KCLU 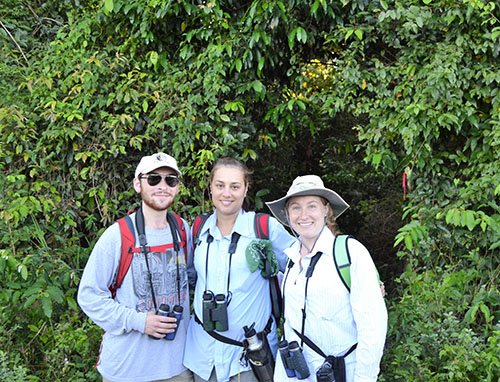 Anita Stone (center) has taken Cal Lutheran students, including recent graduates Jacob Jasper and Stephanie Straw, with her to study monkeys in Brazil since she joined the university’s faculty two years ago.

(THOUSAND OAKS, Calif. – Sept. 25, 2018) A California Lutheran University biologist will discuss her field studies of squirrel monkeys in her native Brazil during an episode of the nationally distributed public radio show “Science Friday” to be broadcast live from KCLU in Thousand Oaks on Friday, Oct. 12.

“Science Friday” staff selected assistant professor of biology Anita Stone to be one of the scientists on the show, which airs from 11 a.m. to 1 p.m. Fridays on KCLU. Host Ira Flatow will interview her for about 20 minutes, during which listeners can call in or tweet their questions.

Stone has been studying the same population of the tiny Saimiri collinsi species of squirrel monkey living in the eastern Amazonia forests since 2002, when she spent a year in the field collecting data for her doctorate in ecology and evolutionary biology. She has returned for about two months every summer to monitor their behavior, taking Cal Lutheran students with her since she joined the university’s faculty two years ago.

Distinguishing the monkeys from each other can be difficult because they weigh no more than two pounds, move quickly and hang out in social groups of about 50. Stone’s team developed a new method of trapping the smart monkeys a few years ago so she could mark some of them with collars and microchips and get blood samples. She has discovered many intriguing behaviors, such as the males remaining on the outer corners of the group except during mating season. Females dominate the males, and even juveniles bully males.

“Science Friday” draws more than 2 million listeners throughout the world each week with its lively and informative discussions about science, technology, health, space and the environment. It started as a program within “Talk of the Nation” in 1991 and spun off as its own series in 2013. Flatow’s many honors include the 2012 Isaac Asimov Award, the 2010 Nierenberg Prize and the 2007 National Science Teachers Association Faraday Science Communicator Award.

KCLU is presenting a special performance featuring Flatow and Southern California scientists on Oct. 13 at the Civic Arts Plaza in Thousand Oaks. Students and other representatives from Cal Lutheran and other area schools will present science demonstrations and information at tables outside the event. All of the tickets have already been distributed to KCLU donors, Cal Lutheran students and faculty, and other representatives from the schools and science community in the area, but the public can hear portions of the event during the Oct. 19 episode of “Science Friday.”