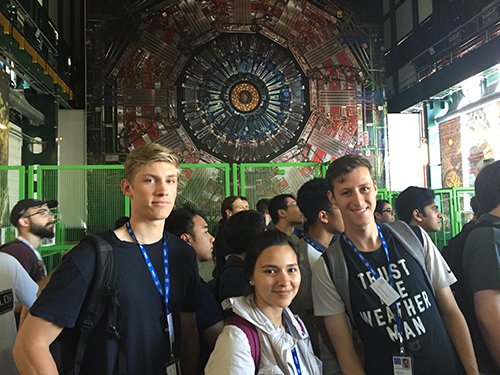 Johann Dias, Hend Kordy and William Parquette stand before a mock-up of a gigantic detector at CERN that is getting an upgrade.

(THOUSAND OAKS, Calif. – July 2, 2018) Three California Lutheran University physics majors concluded three weeks at one of the world’s largest and most respected centers for scientific research, contributing to a massive project examining the makeup of the universe, on Saturday.

Johann Dias of Oxnard, Hend Kordy of Goleta and William Parquette of Yucca Valley assisted Sebastian Carron Montero, an assistant professor of physics at Cal Lutheran, with his ongoing work at CERN in Geneva, Switzerland.

“Having the opportunity to work at CERN is an aspiration of physics students everywhere,” said John Deisz, chair of Cal Lutheran’s physics department. “The lab has produced many fundamental discoveries and there is no other lab in the world better positioned for future discoveries at the frontiers of physics.”

Carron Montero has been collaborating with Joseph Incandela’s High Energy Physics Group at University of California, Santa Barbara on part of a physics experiment called the Compact Muon Solenoid (CMS), one of the largest international scientific collaborations in history. Researchers are completing detector improvements to position it to answer questions that have stumped and divided physicists, including what elementary particles make up dark matter and how the four known physical forces are related. The group’s current goal is to upgrade a section of the onion-layered CMS by replacing its light-sensitive components with a series of silicon-based detectors to enable more precise particle energy measurements. This multi-institution project is known as the High Granularity Calorimeter upgrade.

The students prepared by taking courses on quantum mechanics and particle physics and working with Carron Montero and the UCSB group to manufacture and test detector prototypes. They helped during beam tests of the prototype modules at CERN and are analyzing results with scientists and students from around the world.

“It is inspiring to see people’s minds come together to create such a powerful detector,” Parquette said. “It is groundbreaking research, and to have the opportunity to even make a small impact is something special.”

Carron Montero visits CERN two or three times a year to work on the project. Before coming to Cal Lutheran in 2016, he contributed to research at Fermi National Accelerator Laboratory in Illinois that helped pave the way for the landmark 2012 discovery of the Higgs boson in the ATLAS and CMS experiments at CERN and worked at SLAC National Accelerator Laboratory. He has leveraged that experience to give Cal Lutheran students this incredible opportunity.

“I tell my students that it really does not matter where they come from or even how many resources they have at their disposal,” the Thousand Oaks resident said. “If they really work hard they can be at the cutting edge of physics, or any other field.”