Dr. Laureen L. (Spinas '83) Hill was part of the team that successfully treated the first two U.S. Ebola patients. Now she advises far-flung colleagues on how to run a department during an outbreak. 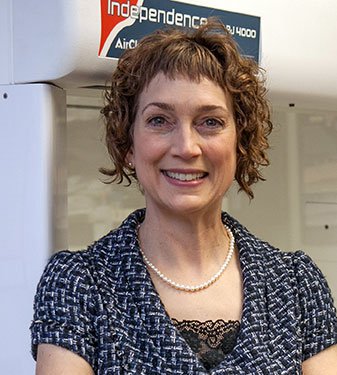 During last year’s Ebola outbreak, Dr. Laureen L. (Spinas ’83) Hill was part of the team that successfully treated the first two U.S. patients. They had been infected on a mission to care for Ebola sufferers in Liberia.

One of them, Dr. Kent Brantley, later observed that fear of the deadly virus worked in opposite ways on the two continents: West Africans might deny that Ebola was real, while Americans seemed to think it was everywhere.

Better-informed people in both places knew the disease was dangerous but containable. At Emory University Hospital in Atlanta – also home to the Centers for Disease Control and Prevention (CDC) – Hill and her colleagues spent hours learning how to “doff,” or remove, a hazmat suit and layers of clothing and paper scrubs.

Mistakes in this intricate process can cause needless contamination of clean zones in the special containment unit for infectious disease. Although Ebola is not spread through the air like the flu, it is highly contagious by way of bodily fluids.

“As someone who works and lives in an operating room, I’m very familiar with sterile techniques, sterile zones and all of that, contamination and decontamination,” said Hill, the chief of anesthesiology and department chair at Emory since 2011. “But this took it to another level. Many of us on the team had never taken care of anybody with that degree of isolation precautions.”

“It can take up to half an hour, easily, to doff,” she said.

Ultimately, Emory cleared four people of Ebola, a victory for the hospital and the U.S. health system. The first two patients arrived early in August and were released within the month.

Although she could not provide details, Hill said that she had a “tiny” role in caring for these patients, especially compared with nurses who remained with them around the clock. To do their job, anesthesiologists may need to intubate patients and get access to blood vessels.

“The people over in Africa are the real heroes…. If you think about it, it’s pretty remarkable that western African countries have been able to contain and, in the case of Nigeria, eradicate the Ebola cases,” said Hill in January. “It’s such an austere environment. And honestly, these people were dying for lack of clean water and rubber gloves. That was how sad that was.”

After seeing doctors at work on her visits to Vietnam, the Andes Mountains and Russia (a trip dedicated to pediatric open heart surgeries), Hill has come to deeply admire medical professionals “around the world and how resourceful they are and what they’re able to achieve with so little. It really is humbling.”

Now, her experience has positioned her to advise U.S. and international colleagues on how to run a department that treats people with Ebola, a disease that was unknown when she attended medical school.

She tells them that the logistics are tough. You can’t make special training available to everyone, and the medical team should be small anyway, since it’s essential for members to maintain their new skills. The team must also be large enough to cover the unit 24 hours a day, bearing in mind doctors’ many commitments.

In the 1980s when Hill was applying to medical school, it was not easy to get accepted out of a small liberal arts college, even with a solid science background and high grades and test scores. She thinks that has changed.

“Medicine has gotten smarter over the last few decades and realized that people coming out of those kinds of educational experiences are the kind of people we want to take care of our patients,” she said. “You know, they have a perspective. They’ve tapped into other dimensions of themselves that might include compassion and ethics and much, much more than science, science, science. I would do it all over again.”