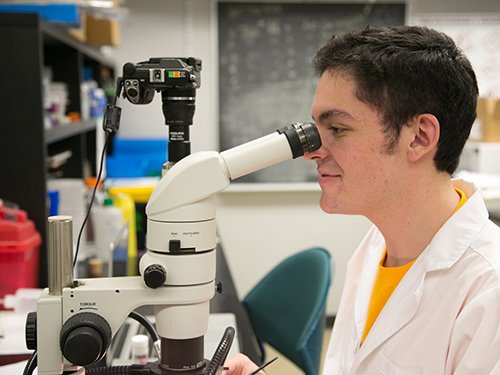 Co-valedictorian Jared Berman is a biology major who has conducted research in genetics and developmental biology since freshman year.

Jared Berman of Westlake Village and Lauren Witman of Simi Valley both received the Provost’s Award for Academic Excellence as valedictorians of the Class of 2015. They had the highest cumulative GPAs for all college work. Berman is a biology major who has conducted research in genetics and developmental biology since freshman year. He is a member of the Tri Beta honor society and University Honors Program and has served as vice president of both the Scandinavian Student Club and the leadership honor society Omicron Delta Kappa. Witman is majoring in psychology and minoring in theology and Christian leadership. She is also a member of the University Honors Program and Omicron Delta Kappa as well as the Psi Chi honor society and has been active in campus ministry and community service.

Kellie Warren, a Thousand Oaks English major, received the $1,000 Mark Van Doren Poetry Prize for a collection of poems. English Department faculty awarded Peterson the $500 Ledbetter Prize for Excellence in Writing for a literary essay that was deemed the best literary work by an English major. Matthew Ruffino of Moorpark received the $500 O. Fritiof Ander History Award as the most outstanding senior history major, and biochemistry major Trevor Hougen of San Diego received the $500 Smith Family Writing History Award for the best history paper submitted during the year.