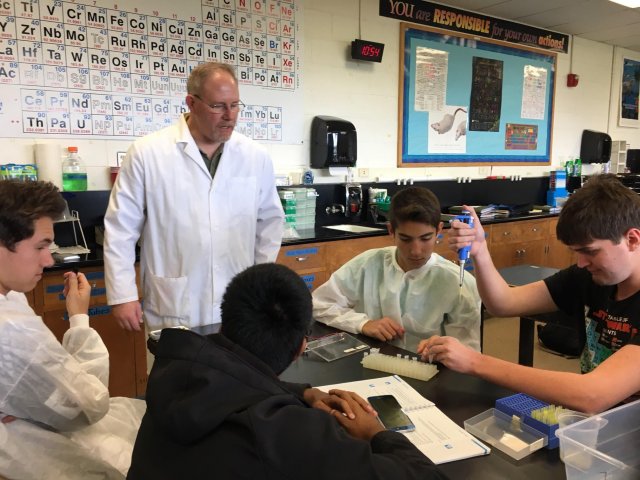 This story was originally published at www.kclu.org. Listen to the story here.

Scientists at biotech companies conduct genetic engineering in their labs to create medicines and other life-saving products to treat patients. And, some high school students on the South Coast are getting hands-on experience in biotechnology.

Students at Newbury Park High School are running their own biotech experiments in the process of producing a protein from genetically modified bacteria.

“They put you in a real world experience. These labs feel like actual projects that scientists at Amgen would work on. It’s preparing you for the future,” she said.

Science teacher Darin Erickson '89 TC '92 is guiding these students through six labs that instruct them on an important lesson in the world of biotech.

“This is teaching them how we can use DNA and manipulate it to produce proteins that -- at a Biotech company such as Amgen -- can be used to make a pharmaceutical drug that could potentially help someone in need,” he said.

This is the Amgen Biotech Experience. The Amgen Foundation has spent about $25 million to offer this innovative science education program that has been providing professional grade lab equipment, supplies, advanced curriculum and professional development to middle and high schools for nearly three decades at no cost.

Jeanette Schulz with the Foundation says students can see the applications of what they’re learning in these labs.

“Understanding that science that they’re learning is real world. What’s making a difference in the lives of hundreds of thousands of patients every year.  They’re much more likely to take an interest in the subject. And that’s the ultimate goal of the Amgen Biotech Experience is to get students excited and interested in science and its potential to change the world,” she said.

The program has impacted 600,000 students to date, including 250,000 in Southern California alone. It’s available across California, Massachusetts, Rhode Island, the District of Columbia, Puerto Rico as well as England and Ireland. But it all started right here at Newbury Park High School when a teacher named Hugh Nelson took a summer internship for biology teachers with Amgen and worked with a scientist to bring what he learned to his classroom – the very same classroom that Erickson now uses.

"I find it kind of ironic that some of the original stuff was  happening in the same room that I’m fortunate to be in now. So it’s really kind of neat,” Erickson said.

His students are using the same tools that Amgen scientists use, like a centrifuge. It separates materials from small samples by spinning these tiny tubes filled with a very small amount of chemicals.

“It can give me really hands-on experience. If I really want to go into a lab when I’m older, I’ll already know how to use these  cool tools. And I think it makes me feel really professional,” said 15-year-old Pooja Bhatnagar.

She says the experience has been so eye-opening that she’s considering a career in biotech.

"If you can do this kind of stuff with DNA to bacteria, then you can really do anything. You can edit human DNA possibly and I feel that’s a huge step in the scientific world,” she said.

But even for students like 16-year-old Vaughn Allen, who wants to go into business and not science, the course is worthwhile.

“I think it’s really interesting to learn about it because it’s going to be a crucial part of our future,” he said.